For an overweight or obese person, frequenting the gym where other, more in-shape, people will see them struggling through their workouts can be a very intimidating and daunting experience. Personal trainers can do a handful of things to make the experience of working out in a gym more welcoming and comfortable for their overweight clients.

It’s common for overweight people to struggle with self-esteem, causing them to have a negative attitude. In addition to conditioning their bodies, trainers need to condition their minds to think positively. Here are some reminders for your clients: 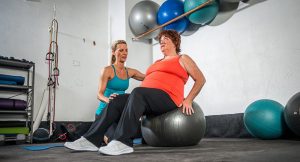 Just because they have always been or became overweight doesn’t mean they always will be. It’s important not to live in the past and not to let the present define the future.

They need to be able to forgive themselves because nobody is perfect, including the ultra fit people. Everybody flounders, but that doesn’t mean they won’t get back on track and reach their goals. If they can’t forgive themselves for a slip-up, they’ll likely beat themselves up over it, which is counter-productive.

Set realistic goals. Setting goals that are too ambitious will set them up for disappointment. For example, they should understand that it’s not realistic to go cold turkey when it comes to quitting junk food, sweets, and other unhealthy foods. Instead, they should focus on weaning themselves off these items. This will make it easier for them to forgive themselves for “cheating” on their diets if they have a soda, piece of cake, a donut, or a Big Mac as they’re getting used to being on a diet.

They shouldn’t resign themselves to the idea that because of their genes, they will always be overweight. Just because everybody in their family is overweight, doesn’t mean they have to be. You can empower them to understand that they have control over what they eat and how hard/how often they train.

Overweight clients will fear being judged. Trainers can sooth their clients’ insecurities and make them feel more comfortable using the following reminders:

Going to the gym is not like going to their junior high or high school gym class. There will be other people there who maybe aren’t obese, but they’re not ripped either – just average folks.

Many gym-goers understand that the gym is about self-improvement. It doesn’t matter what you look like now, but rather where you’re going.

In fact, many gym goers silently cheer on the overweight patrons, applauding their initiative and dedication to make a positive change to their lives.

Another good point to make is this: The people who are in good shape didn’t get that way by spending time focusing on other people in the gym; they were focusing on their own goals. They might have been overweight when they started out, too.

Just because someone is thin, doesn’t mean they’re in shape. An overweight person could be stronger or even out-sprint a thinner person.

How to help your clients stay dedicated to their success:

They can take progress picks to document their weight loss. Having this visual can solidify their progress during times when they feel like they’re getting nowhere. Seeing their progress in the pictures can help motivate them to work even harder.

If they have a good week avoiding temptations, they can document what worked and repeat those things the next time they feel tempted.

Teach them that it’s okay to treat their selves – as long as they don’t use food as a reward. They could reward themselves by getting a massage, buying something they’ve been eyeing for a while, etc.

Excluding negative people. This one is really important. Negative people will drag them down. They should only associate with those who encourage, support, and compliment them on their hard work and dedication. It’s quite possible that their overweight friends, family members, or significant others might degrade them because your clients’ success reminds those people that they’re unhappy with their weights.